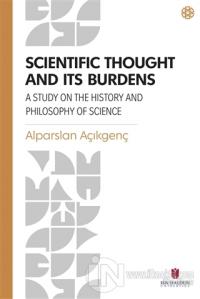 Scientific Thought and Its Burdens

A Study on the History and Philosophy of Science
Alparslan Açıkgenç

https://www.ilknokta.com/alparslan-acikgenc/scientific-thought-and-its-burdens.htm
Scientific Thought and Its Burdens A Study on the History and Philosophy of Science
İbn Haldun Üniversitesi Yayınları
44.00

Scientific Thought and its Burdens is a book to search for the ways in which science has been understood in history and the way we conceive it today. It argues that every human phenomenon has certain mental frameworks through which it is manifested. Then it raises the question: through which mental frameworks is science manifested? First of all, science is a cognitive activity and as such it is an attempt to acquire knowledge of certain objects or phenomena around us. In that case, it must have an epistemological framework, which is developed in this book as the epistemology of science; then, it is an activity carried out by a community of scholars and their students in an uninterrupted chain of tradition. This gives us the sociological framework. Based on these fundamental frameworks, i.e. the cognitive and sociological approach, the concept of science is defined. Due to the lack of a satisfactory epistemological and sociological framework, taken together, many crucial concepts, such as scientific process, scientific consciousness and worldview, concerning the rise and development of science within a civilization has not adequately been explained.

This book thus brings a fresh understanding of sociological concepts concerning science, such as scientific community and tradition. Sufficient material is brought in from the history of science unfolding itself within three civilizations; Greek, Islamic and Western, in order to vindicate the framework in which scientific thought in these communities emerged.