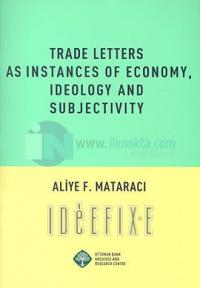 https://www.ilknokta.com/aliye-f-mataraci/trade-letters-as-instances-of-economy-ideology-and-subjectivity.htm
Trade Letters as İnstances of Economy , İdeology and Subjectivity
Osmanlı Bank.Arş.ve Araş.Merkz
6.00
This fascinating acoount of the business activities of the Mataracı family at the turn of the twentieth century can be read both as a case study of early Muslim Ottoman "entreprenurship" and a depiction of the broader socioeconomic context under the 1908- 1918 Young Turk Goverment.

Based on family trade stories, revealed to her thourg interviews held with the Mataracı family elders, and an analysis of the 400 trade letters which were turned over to her, Aliye Mataracı, herself a descendant of the same family, retraces the evolution of the trade busines founded by Hajji Ahmed Efendi and passed on to his three sons, and investigates the emergence of a new way of life and new identities in Ottoman Turkey
(Arka Kapak)