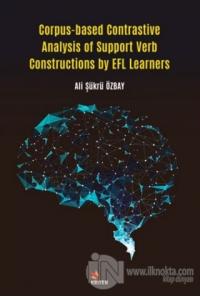 Partly considered as one category of collocations, support verb constructions (SVCs) are described as word combinations, containing a verb and a noun, where the nouns carry the whole meaning and the verbs act as a complement. Despite being very common in English, SCVs seem to be problematic for many L2 language learners. This book therefore attempts to respond to the needs of EFL learners having hard time matching the word combinations and it uses a contrastive corpus analysis methodology based on native and non-native corpora. Having been greatly inspired by Firth (1957) who contended that “you shall know a word by the company it keeps”, I have also focused the emphasis on raising awareness of the EFL learners and teachers for the importance of the role of lexical co-occurrences in understanding word meaning. Hopefully, the prospective readers will appreciate this new perspective related to the combinative nature of English language.